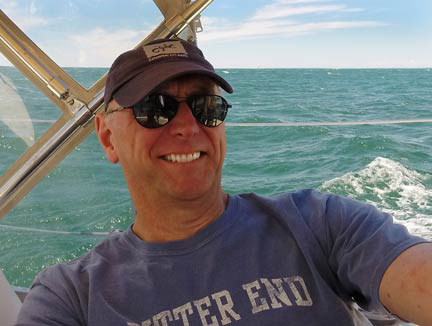 Scott Sager grew up on the coast of Maine and was interested in exploring art at a young age. He began drawing from both reference and personal experiences from memory in grade school; in high school, he started experimenting in the acrylic and watercolor mediums by painting some of the local scenes. He also picked up his father’s love for photography and began learning composition and contrast, while developing prints in the darkroom. He earned his BS from the Art Department of Skidmore College and later studied at the School of Visual Arts in NYC. After college, he began an advertising career in NYC as an associate art director and started shooting TV commercials for various clients while only in his early 20s. He went on and has now spent over 30 years as an art director/creative director at numerous advertising agencies in New York, solving creative challenges for many large blue-chip corporations, such as General Motors, Sony, and USAirways. While he is still an advertising creative director, all those years of design and conceptual artistic experience are now being applied back into the watercolor medium to reproduce scenes Scott has experienced and enjoyed.

The favorite subject matter of Scott’s work is the beautiful New England he grew up in, as well as parts of upstate New York. With a camera in hand, he still makes yearly trips to new destinations in upstate Maine, as well as to Cape Cod and Martha’s Vineyard, to photograph new experiences. All of his paintings start from a personal photograph of the subject, with the end result always being how he saw it that day—his desire is to not abstract the beauty in any way, but to capture it in the most natural and believable way possible. “I love finding unexpected subject matter and then proceeding to recreate it with the true lighting of that moment, whether it be sun or fog. Viewers can then silently nod from their own personal experiences of that area and say to themselves, ‘Yeah, that’s what it’s like there.’”

Scott’s work is in the permanent collection of several large corporations, and numerous private ones in the U.S. and Europe. His work can be seen at the North Water Gallery in Edgartown, MA, as well as the Flat Iron Gallery in Peekskill, NY. Artists that continue to influence him are Winslow Homer, Edward Hopper, and former Vineyard resident, Ray Ellis. Each year, he also participates in solo and group exhibits at various venues, including colleges such as Sarah Lawrence and Skidmore.